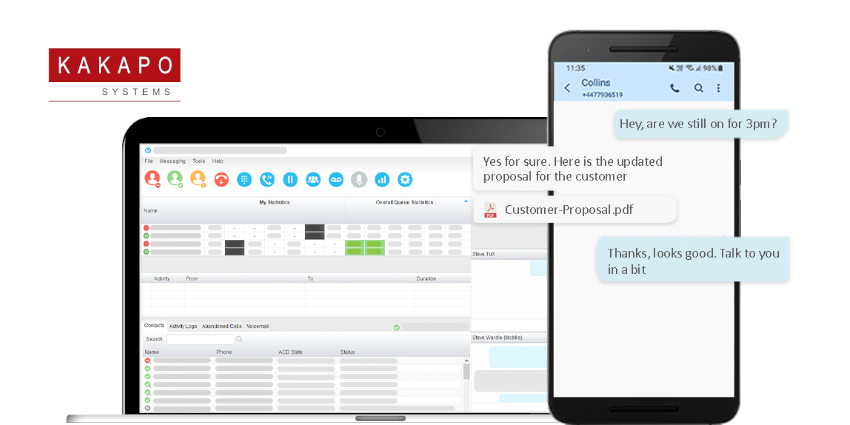 “North America is a region of the world that still prefers communicating using SMS over third-party texting/calling apps like WhatsApp and Viber. SMS is still the default messaging platform for everyone in the U.S.”

With the launch of its SMS integration, Kakapo Systems now enables end users to send and receive text messages using any of its Unity Unified Communications offerings for desktops in a hosted PBX environment, and via Unity Reception. “We’re trying to build everything into a single unified interface for inbound/outbound comms and third-party platforms such as CRMs. We want our users to have one platform to manage all of their communications workflows,” Tutt added.

Kakapo plans to roll out its latest integration in two phases, addressing two paramount markets: enterprise end-users and contact centers. In its first iteration, Kakapo’s SMS integration will let all end users including reception and office workers to send text messages to others within a business setting. If they need to alert someone a guest has arrived, for example. They can even send a text to HR to inform them that their next interviewee is running late.

So, how does it work? Tutt told me, they have teamed up with Telestax, the leader in CPaaS enablement for communication service providers. This means that service providers can keep their existing relationship with Telestax and use Unity apps as the customer front-end to send and receive messages and attachments.

Once Kakapo releases its second version of the API, it will be geared toward contact centers, and work similarly to its slew of recent customer-focused updates such as Twitter Queues. Kakapo’s SMS integration will let agents and management, send, receive, and route SMS messages. For contact center decision-makers who want to enhance the customer experience, this will bring them one step closer to realizing their enterprises’ true omnichannel potential and delighting customers along the way.

According to Tutt, enterprise users can send attachments and standard business documents with the new SMS integration, which relies on SMS messages and not MMS messages, so enterprises don’t accrue additional charges.

Tutt shared when developing its SMS integration, Telestax presented a particular competitive advantage for Kakapo’s U.S. based customers. Telestax has signed deals with nearly-every major telecom provider in the U.S., which allows them to SMS-enable existing mobile phone numbers. This means service providers don’t have to use a separate SMS number which allows them to SMS-enable existing DID phone numbers.

Telestax and Unity end users now have a one-number solution where customers can send/receive SMS messages as well as make and receive calls with the same number and UI, greatly catering to user experience. For sales and customer service purposes, the perks of such an integration are endless and can help create a more seamless communications journey by presenting another worthwhile medium into the omnichannel equation.

Go up
We use cookies on our website to give you the most relevant experience by remembering your preferences and repeat visits. By clicking “Accept All”, you consent to the use of ALL the cookies. However, you may visit "Cookie Settings" to provide a controlled consent.
Cookie SettingsAccept All
Manage consent

This website uses cookies to improve your experience while you navigate through the website. Out of these, the cookies that are categorized as necessary are stored on your browser as they are essential for the working of basic functionalities of the website. We also use third-party cookies that help us analyze and understand how you use this website. These cookies will be stored in your browser only with your consent. You also have the option to opt-out of these cookies. But opting out of some of these cookies may affect your browsing experience.
Necessary Always Enabled
Necessary cookies are absolutely essential for the website to function properly. These cookies ensure basic functionalities and security features of the website, anonymously.
Functional
Functional cookies help to perform certain functionalities like sharing the content of the website on social media platforms, collect feedbacks, and other third-party features.
Performance
Performance cookies are used to understand and analyze the key performance indexes of the website which helps in delivering a better user experience for the visitors.
Analytics
Analytical cookies are used to understand how visitors interact with the website. These cookies help provide information on metrics the number of visitors, bounce rate, traffic source, etc.
Advertisement
Advertisement cookies are used to provide visitors with relevant ads and marketing campaigns. These cookies track visitors across websites and collect information to provide customized ads.
Others
Other uncategorized cookies are those that are being analyzed and have not been classified into a category as yet.
SAVE & ACCEPT